If Your Teeth Could Talk… The Mouth’s Clues Part 1

Please see the photographs here:  Is this you? This is a before and after of the same patient.  The treatment consisted of oral hygiene instruction, periodontal debridement, laser assisted periodontal therapy, and improved brushing and flossing by the patient. The time elapsed bnetween these photographs is a few months.  It doesn’t take long to get healthy and you will achieve a lifetime of benefits!

Look closely at your own gums – about 90% of the population has some amount of gingivitis – do your gums look pink?  Are they inflamed?  Do they bleed when you brush or floss? (They shouldn’t! Not at all!)

If Your Teeth Could Talk …

The Mouth Offers Clues to Disorders and Disease; Dentists Could Play Larger Role in Patient Care

The eyes may be the window to the soul, but the mouth provides an even better view of the body as a whole.

Some of the earliest signs of diabetes, cancer, pregnancy, immune disorders, hormone imbalances and drug issues show up in the gums, teeth and tongue—sometimes long before a patient knows anything is wrong. 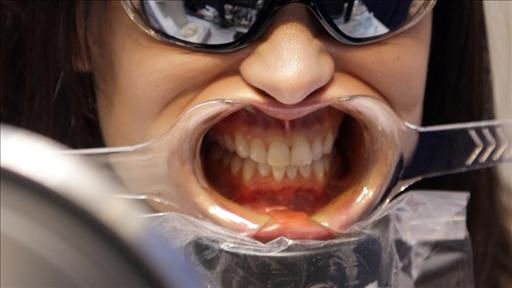 “We have lots of data showing a direct correlation between inflammation in the mouth and inflammation in the body,” says Anthony Iacopino, director of the International Centre for Oral-Systemic Health, which opened at the University of Manitoba Faculty of Dentistry in Canada in 2008. Recent studies also show that treating gum disease improves circulation, reduces inflammation and can even reduce the need for insulin in people with diabetes.

Such findings are fueling a push for dentists to play a greater role in patients’ overall health. Some 20 million Americans—including 6% of children and 9% of adults—saw a dentist but not a doctor in 2008, according to a study in the American Journal of Public Health this month.

“It’s an opportunity to tell a patient, ‘You know, I’m concerned. I think you really need to see a primary care provider,’ so you are moving in the direction of better health,” says the study’s lead researcher Shiela Strauss, co-director of statistics and data management for New York University’s Colleges of Nursing and Dentistry.

George Kivowitz, a restorative dentist with offices in Manhattan and Newtown, Pa., says he has spotted seven cases of cancer in 32 years of practice, as well as cases of bulimia, due to the telltale erosion of enamel on the back of the upper front teeth, and methamphetamine addiction. “We call it ‘meth mouth,’ ” he says. “The outer surface of teeth just rot in a way that’s like nothing else.”

Some of the most distinctive problems come from uncontrolled diabetes, Dr. Kivowitz adds. “The gum tissue has a glistening, shiny look where it meets the teeth. It bleeds easily and pulls away from the bone—and it’s all throughout the mouth.”

An estimated six million Americans have diabetes but don’t know it—and several studies suggest that dentists could help alert them. A 2009 study from New York University found that 93% of people who have periodontal disease are at risk for diabetes, according to the criteria established by American Diabetes Association.

It’s not just that the same lifestyle habits contribute to both gum disease and high blood sugar; the two conditions exacerbate each other, experts say. Inflammation from infected gums makes it more difficult for people with diabetes to control their blood-sugar level, and high blood sugar accelerates tooth decay and gum disease, creating more inflammation.

In our office, we like to tell people that gums are just like skin, and it is not healthy to have skin with open sores, ulcerations, areas that bleed, or any infections.  Healthy skin and healthy gums protect our bodies from the bacteria all around us that cause diseases.  Open sores and infected gums allow bacteria to enter our bloodstreams and cause further problems.

Our biggest problem is that gum disease doesn’t really hurt like infections elsewhere, so people tend to think it is normal for their gums to bleed when they brush, floss, or eat certain foods.  Our office will thoroughly evaluate your gum tissues for any signs of infection or inflammation and show you what should be done to eliminate this for a healthier mouth and a healthier body!

This information shared with you by Julie Gillis, DDS PC.  Our office is located  in Grand Junction, Colorado.  We feel that your dental health is the top priority. and if we can make your smile more attractive while improving your health that is wonderful! Dr. Gillis practices restorative and cosmetic dentistry including porcelain veneers, tooth whitening, implants, crowns, bridges and periodontal care.  Our office website is www.juliegillisds.com.  For further information, please contact us at (970) 242-3635.

Yours for better dental health,